I started listening to SCANDAL somewhat casually in 2010 (if I remember correctly) and I guess they have became a regular feature on my daily playlist by 2012. I started seeing them live in 2013, and to date I have seen eleven gigs. A couple of days back, I did an analysis of Pearl Jam gigs I have been to over the years, and I thought I should do one for SCANDAL. I already had a feeling on how the data would pan out as SCANDAL is a different kettle of fish in the way how they do their set lists.

This the data I have collected where I looked at the set list for all eleven shows against the eight studio albums and one compilation album of B-sides (Encore Show):

To see the data in detail, please click here.

Already we can see that the set list remains somewhat (if not exactly) the same if you attend multiple shows of the same tour. We can expect a slight variation if it is the same album promoted in different tours (citing the Hello World tours in Japan and Europe in 2015 as an example), but at the end of the day it’s an album that they are promoting and we may get to listen to the whole record in said tour.

The following bar chart looks at the number of times SCANDAL have played a song from each album in all the gigs I have attended: 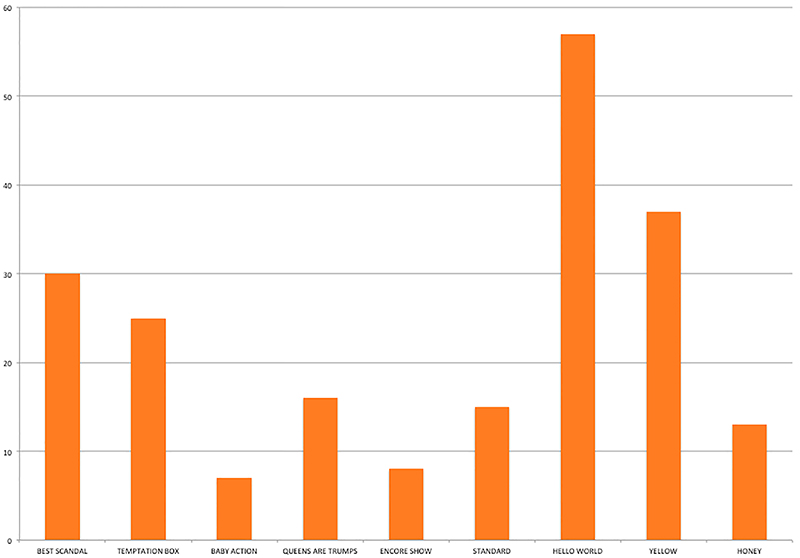 This gives the impression that SCANDAL seems to favour songs from Hello World but my data is skewed by the fact I attended five shows that promoted the album, as well as attending subsequent tours. Another way to look at the collected data is to see the percentage of songs from each album that they had played live in the gigs I attended: 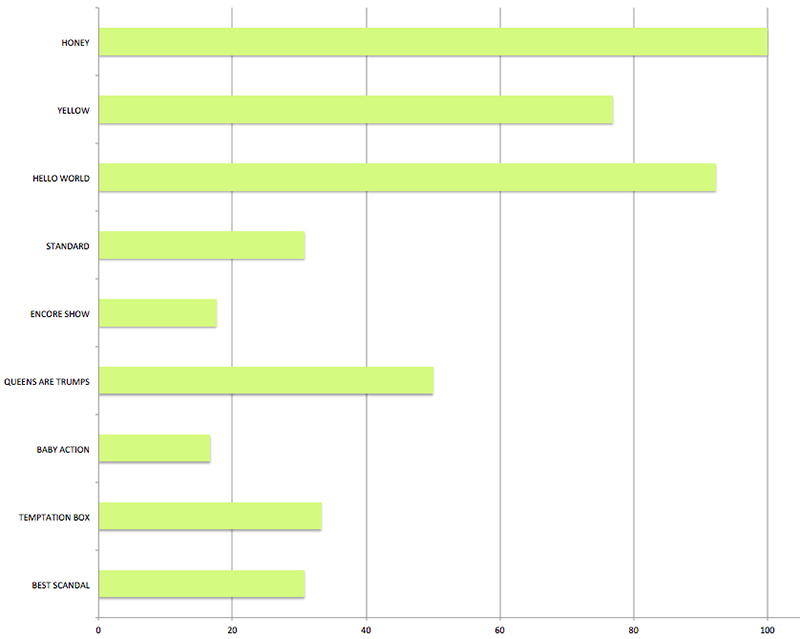 At the top spot is Honey with 100%. To date, I have attended three album tours (Hello World, Yellow and Honey) and as much as the band have tried to include all the songs from the promoted album, Honey is the only album tour that had all the songs. If I had attended any of the Japan Yellow gigs, Yellow could/may well have been at the same spot as Honey, in my books.

Another interesting thing to notice from the two bar charts is the numbers seem to favour the later albums (Hello World onwards in this instance). Again, my data is skewed by my attendance of album tours from Hello World onwards but it illustrates that SCANDAL performs more material from albums that are more contemporary to the tour, and only play fan favourites from the older albums. One thing I also noticed is material from some albums can ‘disappear’ from the set list. Take a look here: 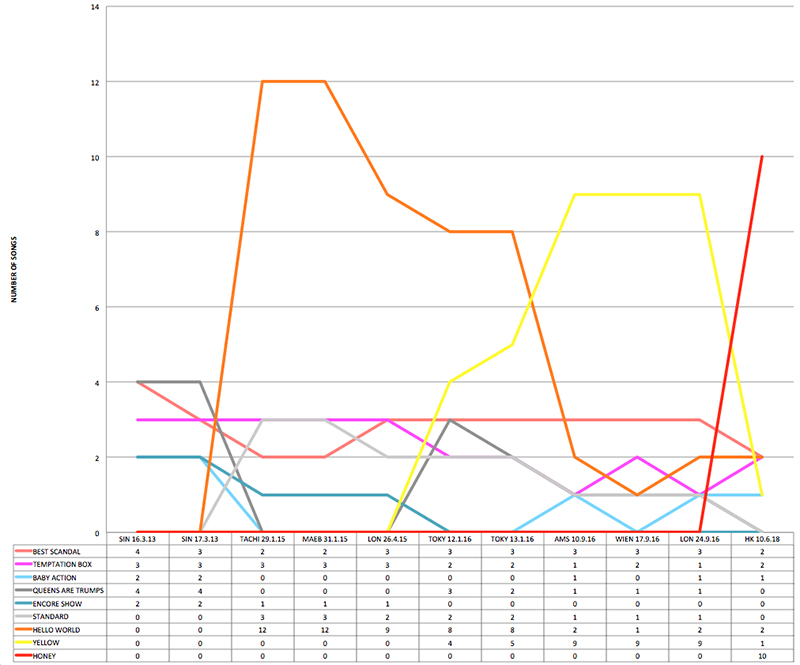 Songs from Baby Action and QaT took a dive to zero during the Hello World tour. When they do reappear after that tour, it’ll be the fan favourites LOVE SURVIVE and Taiyō Scandalous from the respective albums. On a personal note, Baby Action is a less played album in my collection and it is no surprise that not many songs from said album had been played live at the gigs I attended. B-sides/Encore Show material were not played from the Perfect World Budōkan shows onwards.

Which brings us to the fan favourites that will make it to the set list. From the data we have seen, the frequency of material from SCANDAL’s first two albums have been on the low-ish side but pretty much constant throughout all eleven shows I have attended. Here are the number of times each songs had been played in all those shows: 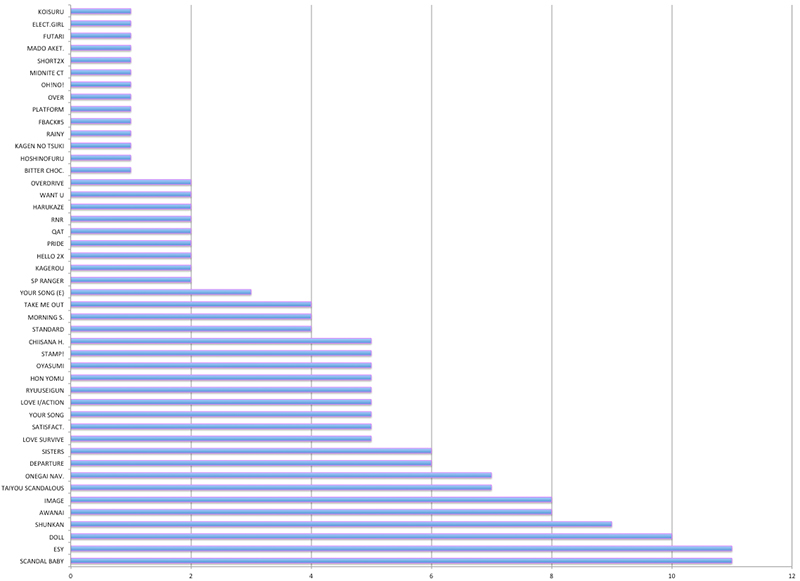 So, low or not, the top positions are held by songs from those first two albums – SCANDAL BABY and ESY. I also feel that if you go to any SCANDAL gig today, there is a fair chance that you’ll defo see them perform these songs – SCANDAL BABY, ESY (11); DOLL (10); Shunkan Sentimental (9); Awanai Tsumori no Genki de ne, Image (8); and Taiyō Scandalous(7). I had expected DOLL to be played in all eleven shows but the band did allude to not play it in the Honey tour. While the numbers may not show it yet, newer songs like Take Me Out, Electric Girl (the new towel-spinning song) or Sisters may well be regulars in upcoming shows, extrapolated from the perpetuation of Sisters in the Honey tour.

I guess if there any take home messages from this exercise:
1. SCANDAL don’t do deep cuts at their gigs. Obviously, they are limited in this aspect as each tour is concentrated on album promotion and playing fan favourites.
2. They stick to the same(ish) set list for each tour. At most, they would rearrange the same songs in the list or swap one or two songs with another. Unfortunately, this is seen in many touring bands, so I really cannot admonish them for this.
3. To follow up on point (2), this has discouraged me to attend more than one show if I were to catch their tour in Japan. I don’t think I’ll be spending all that money to see identical shows like I did for Hello World in 2014. As I always say, I love the band but not that much. For their Japan gigs, I’ll aim for short tours (like the “感謝祭” shows in November this year) or MANIA-only gigs where they actually do deep cuts.