Just like my first (two) SCANDAL gigs in Singapore 5 years ago, I noted that a few of the dates announced for SCANDAL ASIA TOUR 2018 「HONEY」 were to be within the two weeks of my Raya break in KL. I wasn’t too keen on Beijing (too far, visa required) and Manila was on the day of my return to the UK. Therefore, Hong Kong became the date of choice. And it was a good choice as it’d be nice to play tourist in HK as I’ve never been there before, it wasn’t that far away and no visa was needed for this trip. 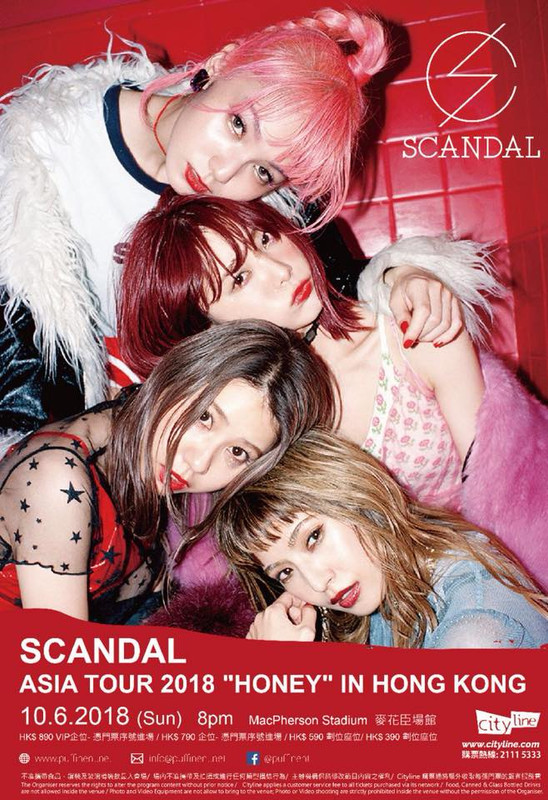 I wondered if the HK show will mirror what was performed for the recent 2018 「HONEY」 Hall Tour in Japan, as they tend to include a few more generic songs for overseas shows. However, the band is no stranger to HK and with the number of local hard core fans around, I won’t be surprised if they’d dispense with said approach and made it like one of their usual shows back in Japan.

I arrived at the MacPherson Stadium (more like a mini sports arena) at half four which was literally a 10-odd minute walk away from the hotel[1]. Met a couple of friends I knew online from SH and SHMY, as well as a few of the SCANDAL’s Sushi HK crew for a chat. I was given a small pink banner, with「出会い１０年ありがとう間だった」written on it[2], to hold up when the band returns onstage for the encore later on. 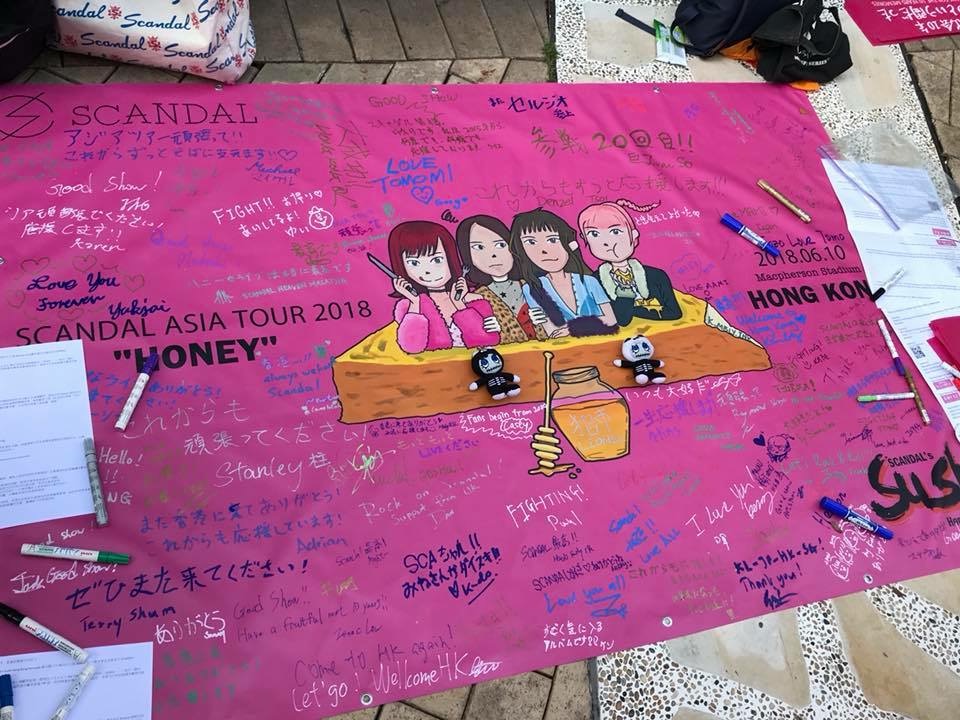 There was also the larger pink banner to write a message on. I really need to return to my GENKI books! The tickets for VIP were well organised as it was numbered. Which meant my mate and I got to go away to grab a bite and return just in time before the queue started moving, and still get to be in our position in the queue. Imagine getting heat stroke by sitting around the venue since early morning like what we did for SCEU2016. No thanks. 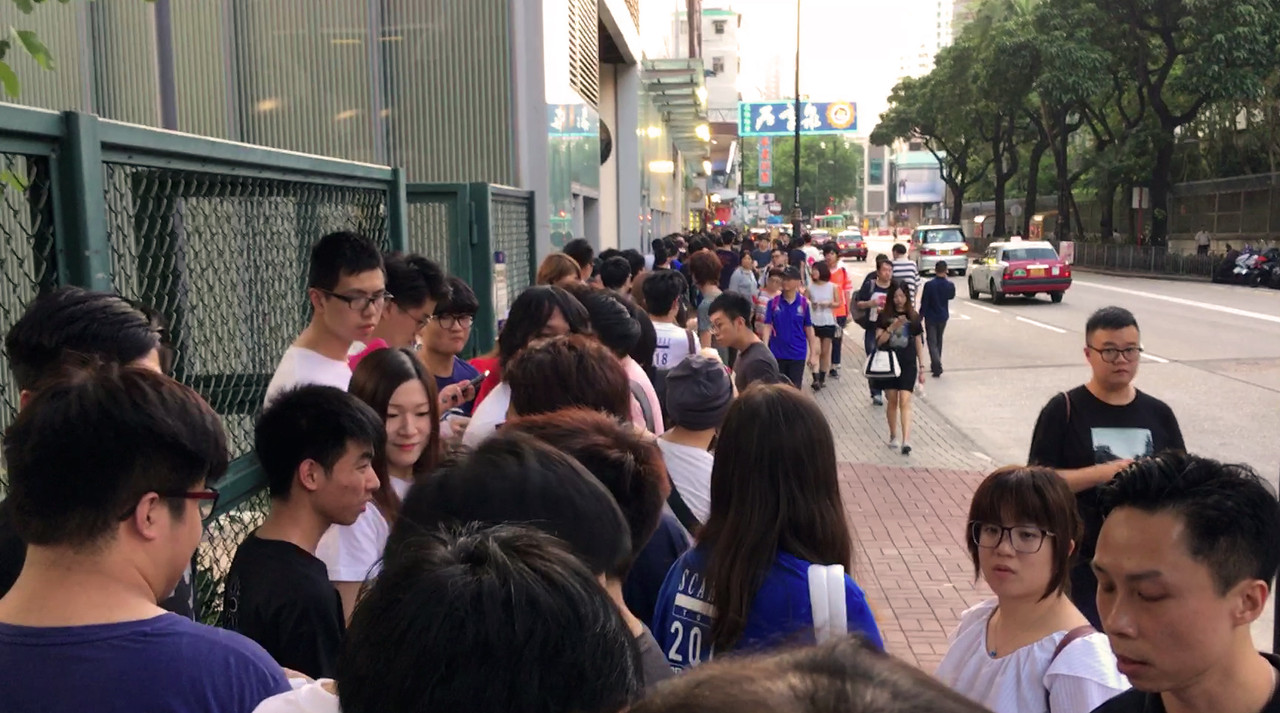 We started to shuffle into the venue at like quarter to seven. Due to my ticket number, I was like 6th row roughly from the stage. As per usual, I prefer to be midway between centre stage and stage left because of the missus. My feet had started to ache[3] and they won’t be onstage ’til like 8PM. The road crew got onstage to do the final line check and this time Kota-san was the only guy I recognised. I just wondered where the likes of Motchy had gone as he’d be in charge of MAMI’s gear all this while[4]. All we had to do was wait while the house PA was weakly blaring out Shōnen Knife’s Top Of The World. 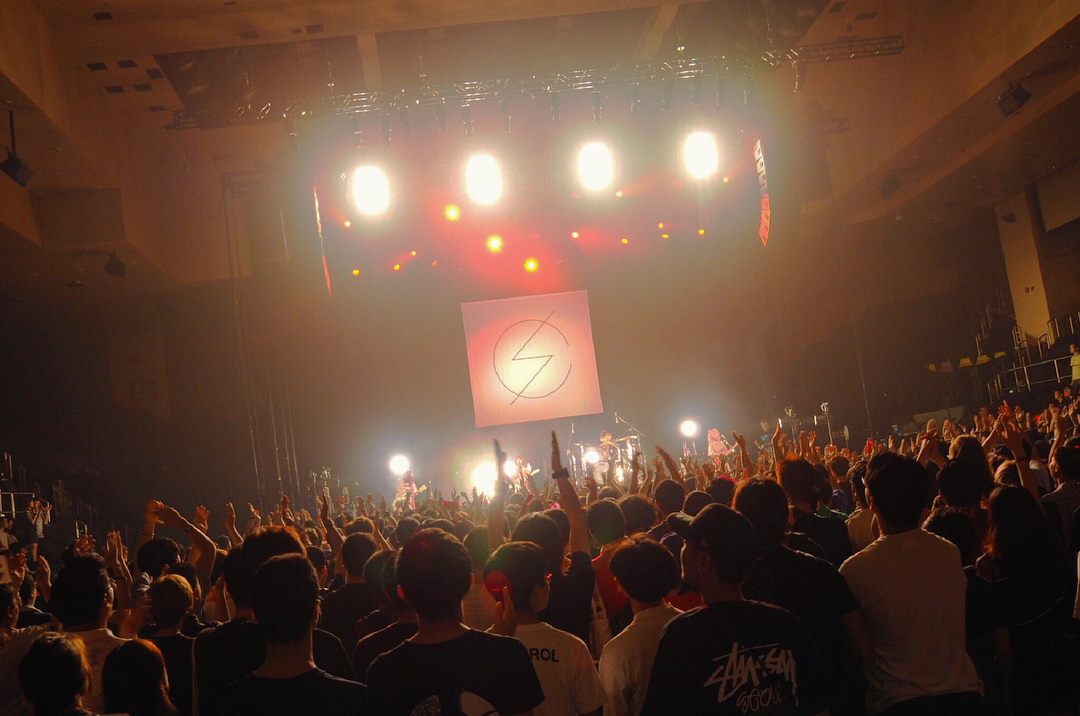 The house lights came down at 8:15PM to a techno/feng tau instrumental piece and SCANDAL came onstage in their loose pink outfits to a resounding audience response. The opening riffs of Platform Syndrome hinted on the set being that of their recent hall tour. HARU was playing her new sig white Fender Tele plugged into what looked like a Fender Twin Reverb. The missus had her ‘Shrek ears’ hair on, and her trusty HSS American Standard Strat, but no Bogner – a rented Marshall half stack was seen behind her. TOMOMI started out with her Yamaha BB2024X, and amp-wise, it was an Ampeg head/cab. RINA’s Pearl kit was a gorgeous purple sparkly, sat nicely on a riser.

Like what I saw two years ago, the lasses rocked really hard and wasted no time to play OVER, the second track from HONEY. I was a tad emotional when they played this, as some friends from SHCB and I covered this same song recently. I worked pretty hard to learn this bastard of a song ^^ – so, you can’t really blame me. 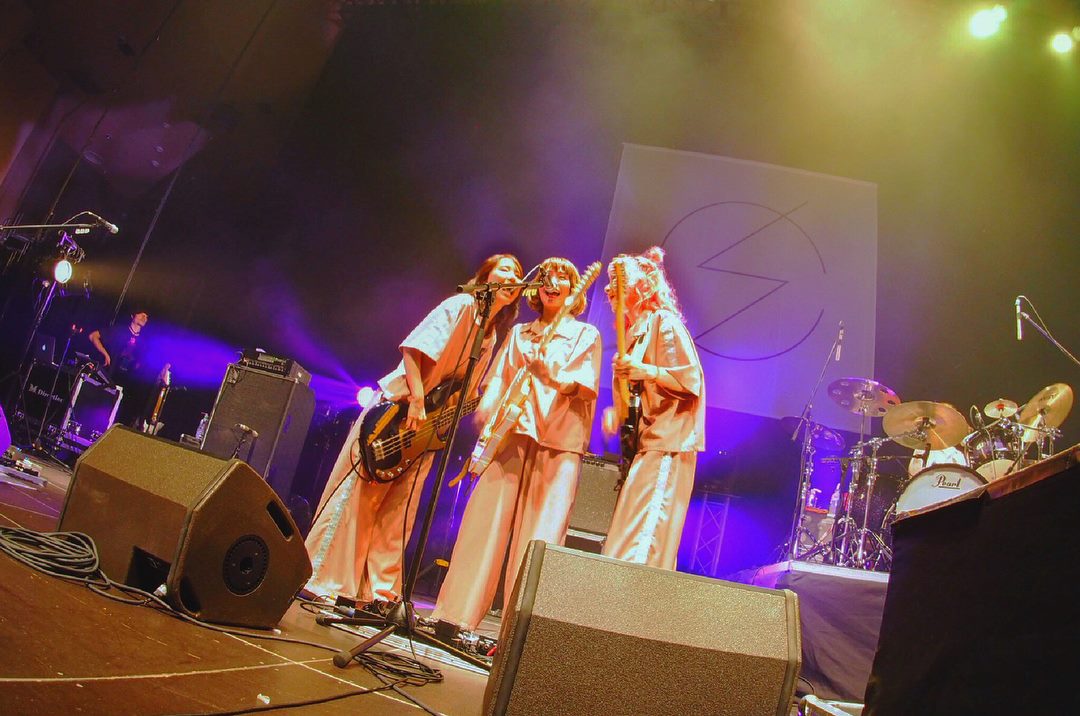 SCANDAL BABY came on next after HARU’s recognisable “1,2 let’s go!”. I’ve seen this crowd favourite in various parts of their set – early on, in the middle and as a closer in the encore. I could still remember the 「本当にいつもあなたに解って。。」bit, so I was pleased with myself.

HARU introduced the band early on in the set, complete with her cheekily asking if she was girlfriend-able[5], which was followed by MAMI and RINA. As for TOMOMI, her bandmates did the asking for her, if I remember correctly. I’m sure you can just imagine how excited the crowd was during this MC. It was back to material from HONEY again, this time with the frenetic missus-fronted Oh! No!. I could only muster a mini skanking move to this lest I were to start hitting all and sundry around me. Kan Bīru was a nice inclusion to the set, reminding me of the time HELLO WORLD came out[6] as well as the nostalgia of a TOMOMI-fronted SCANDAL song like them old days. 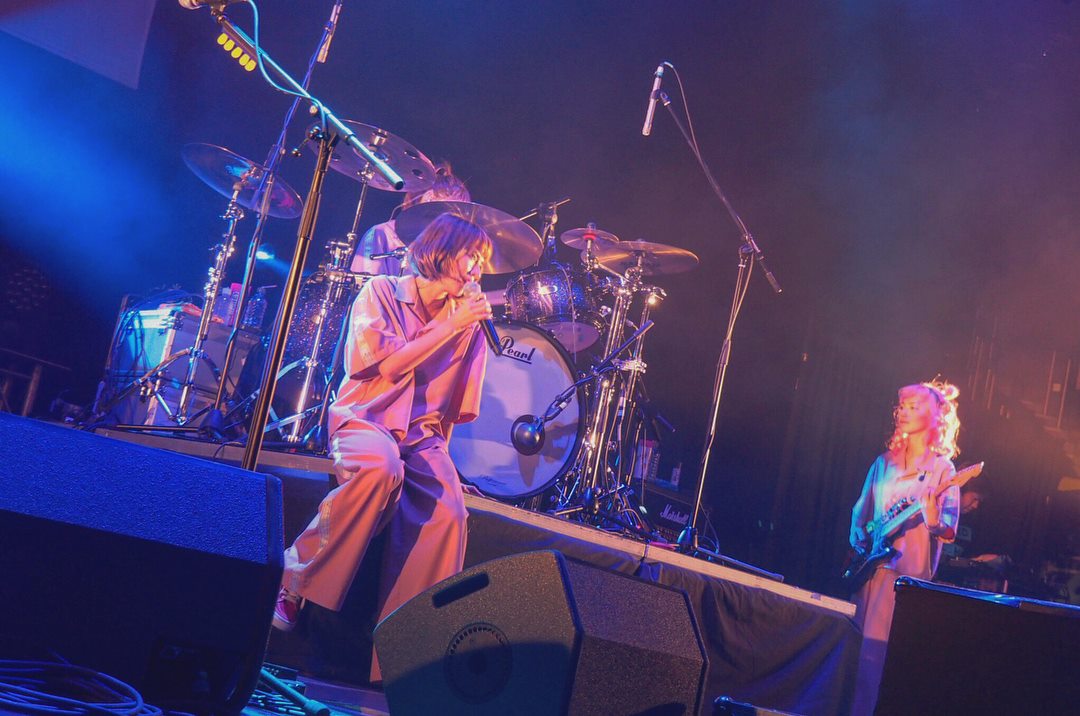 The next couple of songs were the more mid-tempo HONEY ones, which I actually like very much. So, I was sha la la-ing on Short Short, followed by the R’n’B-esque Mado wo aketara where HARU dispensed with her Tele. The last time I saw a guitar-less HARU live was 5 years ago in Singapore when the band performed Rock ‘n Roll from QaT. By this time, listening to HARU’s current voice register reaffirms the similarity between hers and TOMOMI’s, obviating the need for dual lead vocals in their current material. Another nostalgic trip down HELLO WORLD way in the form of Departure came next in the set. By this time I wasn’t too fussed with the arm-waving manoeuvres that the Japanese fans love so much. Interestingly, it’s not so much here but I was told that there were more casual fans than the Japan-commuting step-memorising ones. 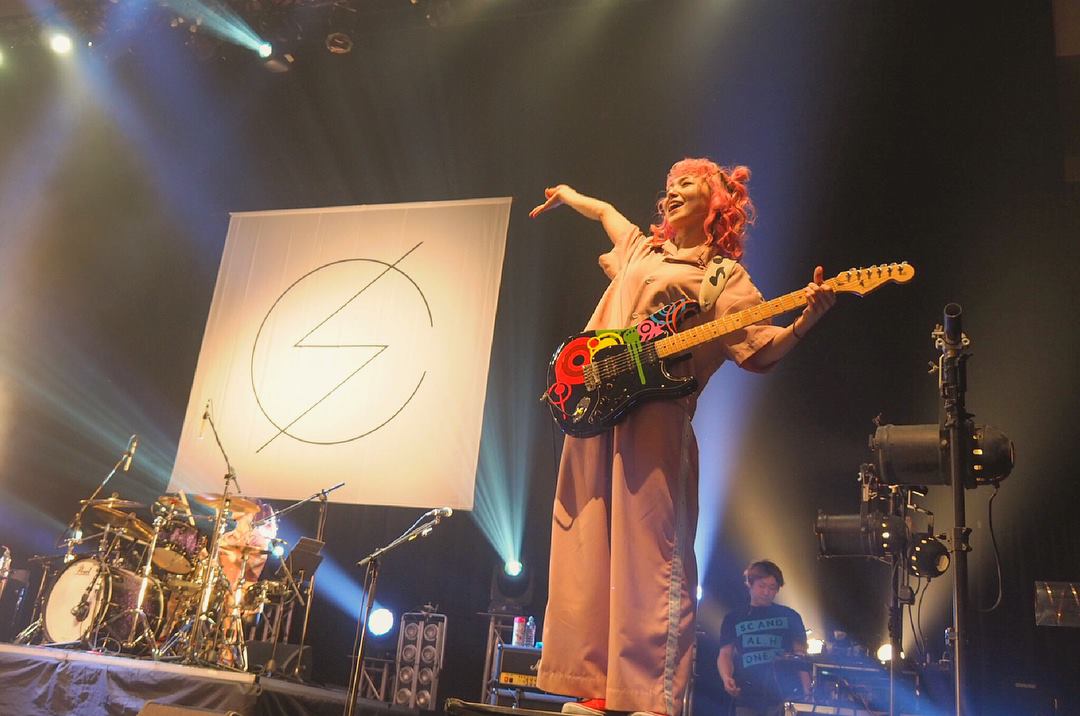 Futari was never a firm favourite of mine, so my senses only perked up again when it was time for Midnight City. I was so looking forward to see how RINA did this and I must say it did look like it was old hat for her. RINA’s drums that started Electric Girl prompted me to lift the band towel up in the air for this one fan manoeuvre which I didn’t mind participating in – the towel twirl. Suffice to say the twirls were less tiring than that for DOLL. Heh. 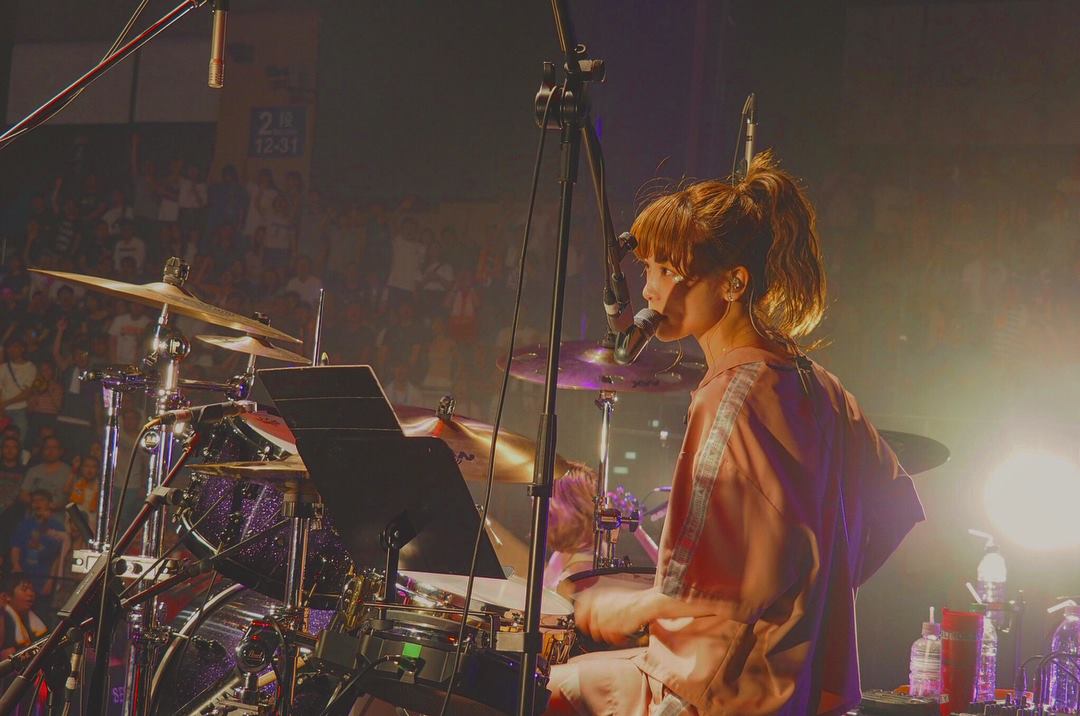 With 80% of HONEY done, it was time for a few old favs to be churned out. The jump-to-the-chorus ESY, the debut album’s first single Space Ranger which I’ve seen live 5 years ago, and the anisong[7] Shunkan Sentimental. The B-sider Flashback was one song that I really wanted to catch live. I noticed they had been playing this song of late and was so keen to see this played live this night. It was also this song that the entire band proved their mettle. The PA effed up for a few secs, like twice, much to the obvious horror seen on Kota-san’s face. All you could hear was the guitar/bass from the amps onstage and RINA’s bare drum sounds. SCANDAL soldiered on, playing their hearts out, and the audience simply spurred them on. The PA screw up appeared to have been sorted, without having to get the band to stop. Nice one! 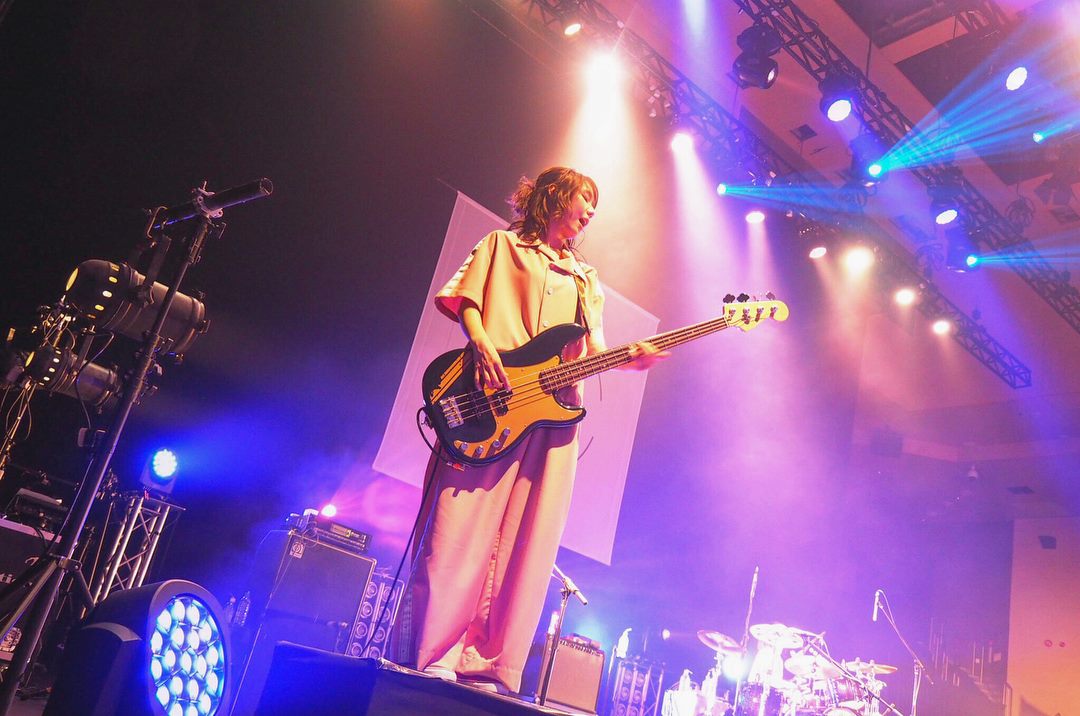 To close the main set, they played the last two songs from HONEY – TMO and Koisuru Universe. I have seen TMO throughout the SCEU2016 shows that I managed to attend, but I still couldn’t help enjoying this infective ditty. 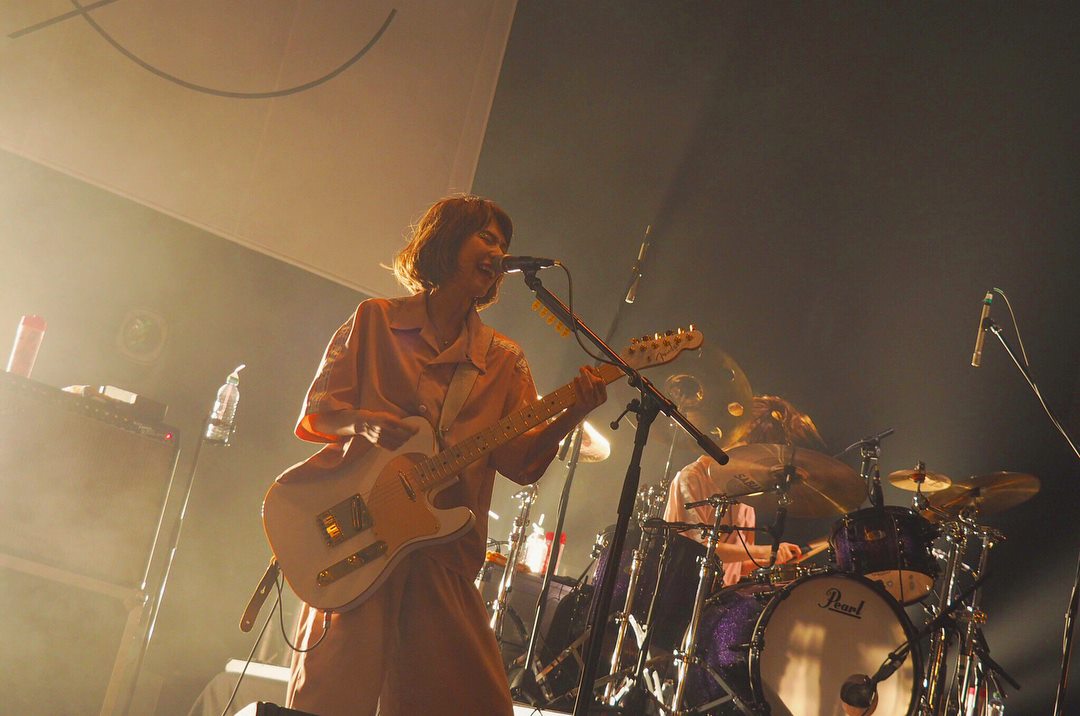 During this brief intermission, the HK fans organised for the audience to sing the la la la lalalala part from さよなら My Friend, as opposed to chanting en-ko-ru! like we always do at the Japanese/Asian gigs. The band then reappeared onstage donning SCANDAL tour tees and were gobsmacked to see a see of pink notes. Not to sure if they were moved to tears like they did for the Bangkok show in 2016, but they sure seemed happy!

HARU picked up her sig Tele and began strumming chords to a spoken word segment in Cantonese which pretty much expressed the band’s thanks to all for coming[8], which continued on to be the intro to Sisters. This time, I was pleased with this version of the song and more so as the improv does appear to be better now and less contrived. As a final note, LOVE SURVIVE gave the crowd the final chance to go all out singing/dancing along with the band.

The girls gave their final bow and collected the pink banner that the fans signed. TOMOMI and MAMI took turns wearing the banner around their bodies, prancing about onstage, with the PA blaring out Platform Syndrome in the background. Once the band left the stage, the VIP ticket holders stayed back waiting for the band to reappear for the ultra-short meet & greet sesh. I was kinda hoping it’d be like the gigs in Singapore, so my friend and I gravitated to the back of the VIP crowd. And I was right, the peeps at the back get to meet the band first. I was surprised to see people were kinda hesitating, so I thought sod it, if you lot are taking your time, I’d go ahead. I think we were like the first 20 fans that got to meet the band and one of the reasons that I was keen to head off first was that I wanted to attempt to say something as opposed to high fiving each of them and moving on. 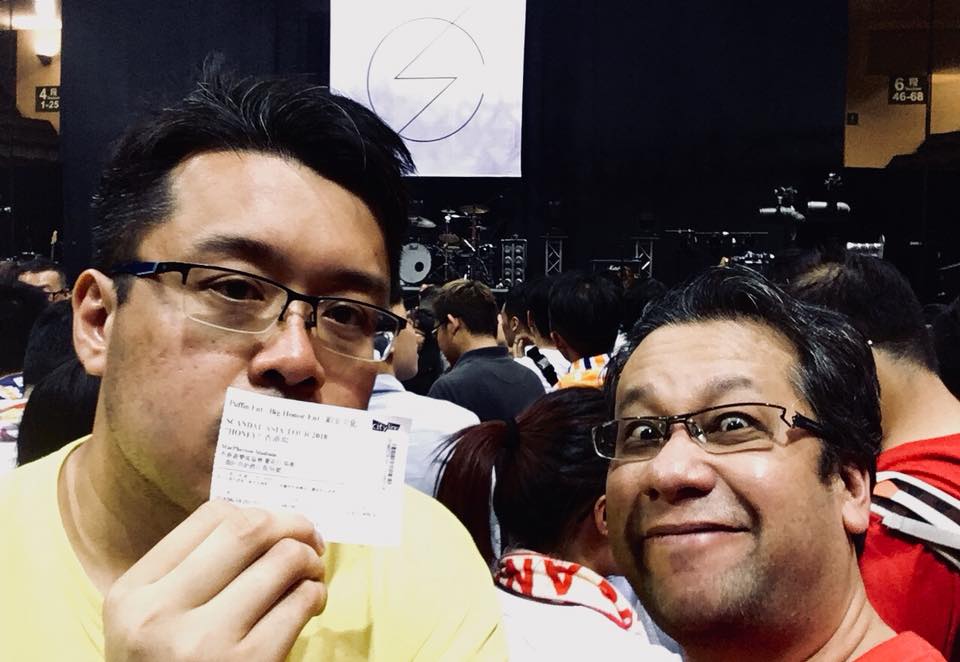 To RINA, I told her “Vous êtes très bien!” to which her eyes lit up and she leaned forward going “Ahhhh!” smiling happily! I bet she wasn’t expecting to be greeted in French in deepest Mong Kok. TOMOMI was next, and I kinda gambled to say,”Amsterdam. 覚えてる？”[9] whilst pointing to my t-shirt in an attempt to tell the band that I’ve seen them this number of times, to which she gave me the same cute clueless TOMOMI look I got back in 2015 in London. I didn’t mind it at all. I commented to MAMI as to where her red sig Strat was whilst high fiving her, and unfortunately, as it prolly felt that I was talking too much I high fived HARU and simply just smiled at her! 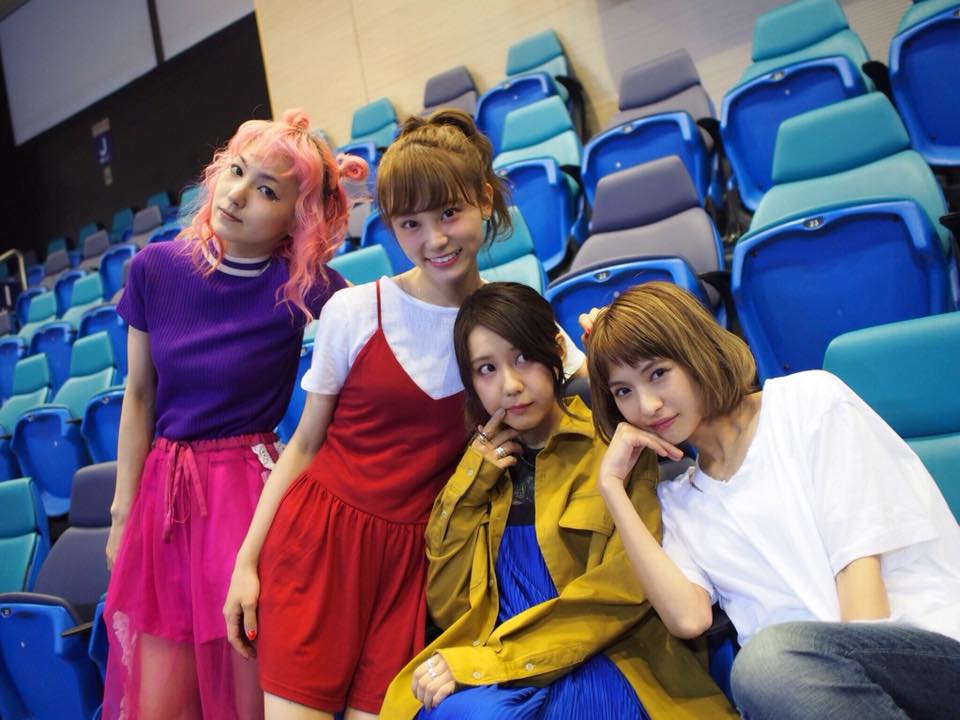 I was happy to finally get to see the entire HONEY album live, without going to Japan. And if you think about it, you’ll never get to meet the band anyway at a Japanese show. Not too sure if they did a M&G lottery like they did for the 47 prefectures tour. Here’s to November, as, if I am lucky, I’d be flying to Ōsaka to catch them again, this time at a ZEPP venue. Twice. Then, all that is left is attending a MANIA-only ライブハウス show, and I can prolly hang up my SCANDAL fan hat. If I wanted to. Fat chance, I guess.

A big thanks to Oli and Yin Ching for the help with VIP tickets!